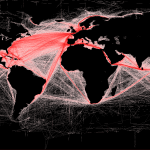 rs can be apt to eulogise ‘the city’ as the dynamic hub where creativity charts our future.  But ‘the city’ is as much a state of mind as a geo-demographic fact.  So what happens when a rural enterprise sets out to be as connected, relevant and pioneering as anything in SE1?

Berwick Film & Media Arts Festival, North by Northeast,  opens this week with some of the best films and moving image art from the North Sea rim of the town’s historic trading routes.   The festival has been embraced by artists, embassies and cultural partners throughout the Nordic countries.

This kind of connectivity is harder outside of large urban conurbations, but as Berwick is discovering, once achieved can be as useful a developmental platform as the showpiece events of Manchester, Edinburgh or London.    Image: Sea Lane/Wikipedia.org