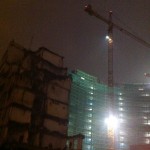 n project is first and foremost about a stable Europe.   The embedding of human rights in this endeavour seems to me a worthwhile enterprise, reinforced in a recent visit to Warsaw to discuss the relationship of the right to culture to current and future European human rights legislation. This is uppermost in the minds of those working towards Warsaw’s Capital of Culture in 2016.

Our relationship to culture is, however, not just about accessing it, but also how we make it, and how we make it work for our relationships with other people both where we live, and where we don’t.    Culture is partly  ‘anti-propaganda’, stripping away the myths and histories used to subsume us in national or commercial interests.

The day after my return, in a post screening discussion of Chinese cinema, the speaker stated ‘heritage cinema always rewrites history’, causing me to rewind the various filmic encounters of the previous days: Wajda’s eulogising ‘Walesa, Man of Hope’; Warsaw Uprising Museum’s 3D flypast of 1944 devastation; and the ‘poster boy’ linking of WW1 remembrance and C21st military adventurism on the Heathrow Express television.   The Chinese cinema debate emphasised that culture needs plurality in both production and consumption.  The Polish debate emphasised the work needed to achieve it.  (Image: Warsaw under construction)