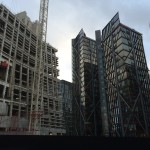 The current debate on geographic distribution of arts funding reminded me of an argument I once had with a film colleague who had just pronounced to the admirable Estelle Morris that film was more egalitarian than classical music and therefore deserving of some of its funding.  It seems to me that both robbing Valery to pay Steve, and Boris to pay Bradford is missing the big picture.   There is no doubt that London-centrism of arts activity is on the rise as the public pound shrinks in its mixed economy.  This does not mean that Londoners are privileged.  If you are on a minimum wage in Peckham are you really culturally ‘better off’ than if you are on a minimum wage in Blackburn?

There is no doubt that principles of cultural democracy, and ‘creative city’ energy are threatened by the unpalatable London bubble.  The sector needs to demonstrate its commitment to the ‘everyone’ bit of Arts Council England’s mission.  And for those London nested organisation with ‘national’ in their title.  Well, it should be more than just a brand.         image: Tate Modern extension, author’s photograph