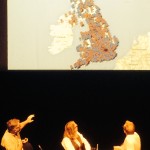 Will the producers of evidence ever be reconciled with its marketplace?   Supporting an outward looking culture of evidence exchange to inform social policy is the aim of a new initiative led by Carnegie UK Trust in association with the Joseph Rowntree Foundation, and  subsequent discussions usefully traverse the importance of telling the story, understanding the ‘knowledge into action journey’ and ‘changing the value consensus’.  Herding cats would be easier.  Sifting evidence is needed to enhance quality and authority, but technologically liberated citizen researchers are a growing force.  Interdisciplinarity and cross-sectoral working are a clear direction of travel, but the institutional frame remains relatively unchanged.  The contradiction of global context and the degree of UK focus in the report is particularly noticeable in Scotland following independence minded international comparison and relationship building.

This is not to say that this initiative is not important.  Recent UK Government figures show that almost two thirds of UK R&D is done and ‘told’ by the private sector and initiatives that can contribute to critical mass and effective communications for the research of underrepresented sectors are to be welcomed.

Information on UK R&D spend can be found on page 26 of: http://www.parliament.uk/briefing-papers/rp14-47/social-indicators