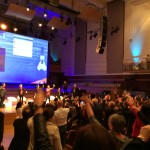 Day two of the European Cultural Forum began with some clear statements of policy and strategic intent, with Vice President Mogherini impressing with her outline of a new strategy for the role of culture that will be shortly be presented to the Parliament.  Cultural diplomacy, plurality and  generation Erasmus were all put centre stage.  The subsequent discussions brought the challenges of implementation to the fore.  Shreela Ghosh reminded us that multiculturalism under attack is not the same as multiculturalism failing. Representatives from Southern Europe were quick to point to the impact of austerity on the capacity and resources on the ground, where cultural strategy is executed.

It was, however, the discussions about language, identity and communications which were most interesting. It was good to hear the Commission’s Martine Reicherts call for the EU to be less timid in talking about what it attempts, and what it achieves.  But Elif Shafak’s comments on how our media’s positioning Turkey as a dangerous ‘other’ played into the hands of those working to dismantle the European Turkey of her childhood were compelling. She talked of the cognitive gaps that emerge as we use the same words differently as we move from country to country.  Not a bad way to consider sectorial gaps, and tensions that emerged earlier in the forum when considering the relationship between culture and creative industries.  Getting the language right is something we learned the hard way in Scotland in the ‘growing pains’ of a brave move to merge arts and the creative industries strategy and investment.