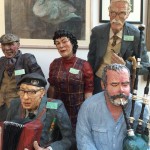 “The space between is the space where things change” is how Prof. Gary West introduced us to his liking for liminality and his pondering of how to give voice to Jock Duncan’s Scots language archives of WW1 veterans at ‘Crossing Boundaries: Diverse Voices in Traditional Culture’  today.  Actors and musicians have the skills to explore this kind of challenge, but what about larger questions of crossing cultural boundaries of class, religion and ethnicity?  Scotland has a great schools platform for exploring these questions in the curriculum for excellence, but what about teachers and parents appetite to do so, and what about a curriculum for excellence for society as a whole? The session went on to explore culture, diverse communities and public spaces as well as the question of whether we have an appropriate open public space in which culture can operate.

Supporting and delivering community driven cultural events in public space is not for the fainthearted. There are potential tensions at every corner, between different community interest groups, with conflicting creative priorities as well as with the gatekeepers to the public space. Local Councillors have traditionally played an important role here, but the depletion of local authority capacity is a major issue.

Could the recently announced 2018 European Year of Cultural Heritage be useful here in bringing together a wide range of agencies, organisations and the Scottish Government to make a step change in the diversity and accessibility of cultural heritage in Scotland? It follows hard on the heels of Scotland’s 2017 Year of History, Heritage and Archaeology and provides a focus that chimes with the country’s enthusiasm for taking its place on the European and international stage. The fact that it is a little over a year and a half away should also capture the attention of all the interested parties. Liz McConnell of BEMIS gave a hint of what may be possible with her account of how a small investment linked to the 2015 Year of Food & Drink led to 65 culturally diverse projects in 15 different conurbations, where 60% were new applicants.