It’s been a great year and a real pleasure to work with new clients.  Strategic planning work in Northamptonshire early in the year preceded other Midlands work with Arts Gateway MK and OPUN Architecture Centre.  Projects in Shetland and Orkney introduced us to some magical places and projects.  Successful feasibility saw the launch of both Ayr Gaiety Theatre and the NN contemporary art space.  Our Director contributed to the development of a cultural evaluation framework for Europe as well as putting evaluation into practice for the European Commission.  2013 is shaping up well with new and interesting  projects kicking off in January including a new Drew Wylie strand of work with science engagement projects.  Exciting times ahead.

Why is it always about the screen?

Ben Templeton of Thoughtden made a thought provoking contribution to NESTA’s Digital Day in Edinburgh last week.  The day gave us good examples from the English end of the scheme (video streaming to music venues; apps aimed at students; digital kiosks). Ben also gave us great homilies: “if a project isn’t working take things away, don’t add things”;  “failing early is important”; “its all about the content”;  “think about ways to make it more human”.  His examples were fun, especially the ones that got away, like ‘TamigArtchi’ an app where you looked after Tracy Emin on your phone.

I was left wondering how the haptic world and Ben’s entrepreneurial world will collide and if our sensorium will escape imprisonment in the screen.  There is an increasing interest in how the multi-sensory and digital are coming together.   Last years Sensory Worlds Conference (www.iash.ed.ac.uk/Sawyer/Conference.html) at the University of Edinburgh was but one example of international collaborations emerging around a rediscovery of the senses.

Ben reminded us of how frustrating it is that so much of our living requires paying attention to a screen and the creative digital challenge of emancipating us from it.

The Complexity of Science and Innovation Policy – Danny Horling of the Rathenau Inst.

January 30th, 2012 | Posted by admin in arts & science | ways of working - (Comments Off on The Complexity of Science and Innovation Policy – Danny Horling of the Rathenau Inst.)

This debate was organised by University of Edinburgh and has great relevance for any sector where policy doesn’t seem to keep pace with developments in technology, production or distribution.  Horlings is concerned that policy makers don’t see that research and policy are all part of the same process, using ‘hard evidence for short term policy’ when scientists know their work is a longer term project, with different accountabilities. His research is founded on the concepts of ‘focus’ and ‘mass’ and he found that Holland, like its comparator countries, had experienced economic ‘despecialisation’ since the early 1980’s, with primary sectors either stable or in decline. This contrasts sharply with many Asian countries where a top down focus on specialism had seen rapid sectoral growth.
The research was controversial for policy makers in that it revealed that Dutch sectors that were both growing and increasing market share were in environmental and health science areas, and not at all aligned with where R&D spend had been applied. This situation may be partly due to the complex science system, with a range of agency applied between research (Universities) and policy (Government). Attempts to direct research through resourcing have stumbled on a ‘grant shopping’ approach at work within the research co-ordinating frame of heirarchy, networks and markets. Associated research also found that the application of management to research groups made no difference to the quality and impact of results, whereas extended networking did. While a scientist’s work consists of ‘multiple finite research tools’ they are applied in relation to the potential reputational gain for the scientist. Their mapping of individual portfolios found that PhD study was only a gateway to research and that scientists then adopted a portfolio of parallel research trails that only stabilised once they reached a senior position.
Horlings questions whether intervention in the ‘natural processes’ of the science system is always necessary, and whether ‘softer’ incentivizing interventions may be more effective, such as rewarding useful knowledge, or involving scientist in weighing the opportunity costs of research decisions. The research is clearly a useful reality check on the way the science system has developed a separate rationale from the evidence and evaluation that should guide investment. That is not to say that investment in stable or declining sectors may not be valuable. They represent a critical mass of the economy and ‘running to stay still’ is the only viable strategy. Also the concept of the ‘natural process’ and the neutrality of Universities themselves in his actor based approach could be considered a kind of ivory towerism. The overall project is, however, exciting and the Institute is currently helping develop indicators and map stakeholders in areas of the CCI sector that have traditionally remained opaque to this approach. The question of the relationship between research and the narrative that informs the policy frame, as opposed to the relationship between research and policymaker is ripe for more exploration.  This conclusion mirrors discussions in CCI where a decade of evidence doesn’t appear to have formed into a meaningful narrative for policymakers.

ASCUS pop up gallery at the St James Centre, Edinburgh

January 19th, 2012 | Posted by admin in arts & science | news - (Comments Off on ASCUS pop up gallery at the St James Centre, Edinburgh)

The ASCUS art science collaborative exhibition opening at our new temporary gallery at the St James Centre was a big success this evening. The exhibition consists of 5 artist and scientist collaborative commissions supported by Beltane and organised and selected by ASCUS. The mall provided us with a free vacant unit and ‘neighbour’ John Lewis with equipment. The hardworking ASCUS team of Mark, Emily, Betsy and Julia created a welcoming gallery and promotion, and a team of volunteer invigilators will work over the next couple of months. We are keen to host art / science themed activities in the space in February. Hit the website (ascus.org.uk) if interested. 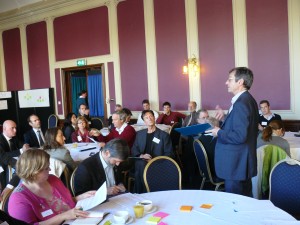