Drew Wylie’s recent review of the cultural and creative industries in Northamptonshire really demonstrated two of the most important current strategic facts of life.  First, it is time that we focus our strategic approach and advocacy on a cultural and creative industries sector that is more important to the UK than it is to almost any other economy in the world.  Think together and act together, whether you run a library service, direct a theatre, design cars, or publish magazines.

Second, switch the balance of review and strategy from evidence to action.  This means making sure you have the evidence to back up your approach, but don’t parade it for its own sake.  Focus on what you want to do and how you intend to do it.

The review seems to have successfully implemented this approach and is already swinging attention and investment in the direction of the sector. Click to see the executive summary:

Reflections on festival planning in Berwick upon Tweed

March 10th, 2012 | Posted by admin in creative industries | digital - (Comments Off on Reflections on festival planning in Berwick upon Tweed) 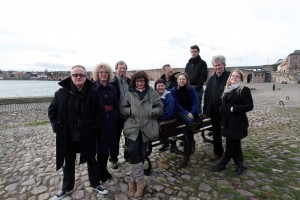 great mash up of art, film, entertainment, heritage, built environment, rural setting, intellectual curiosity and national borders, so discussions of what the festival should be, and even what it should be called are not entirely straightforward.  We now have the added complication of the explosion of digital, with its merging of cultural production and consumption, and cultural integrating of work created for many platforms.

It is clear that both the need to use the town itself as screen and canvas, and a thematic programming frame introduces a type of dynamic coherence to the festival, but what of the digital opportunity.  I grew up in Northumberland, escaping the cultural confines of rural life as young as possible.  Can a festival harness the glamour of film, universality and mutability of digital, and celebration of place to change, or at least enhance lives, particularly young lives?

The Festival Chair and co-founder, Huw Davies, is on the far left and the Director, Melanie Iredale on the far right of this picture.  http://www.berwickfilm-artsfest.com/

A walk on the Clyde

February 27th, 2012 | Posted by admin in creative industries | cultural policy - (Comments Off on A walk on the Clyde)

A visit to SECC in Glasgow to attend the 2014 Commonwealth Games business briefing gave an opportunity to do the 25 minute walk from Central Station along the river Clyde to the venue.  Something I had never done before despite, in 2009, working as part of a team reviewing Clyde tourism for Scottish Enterprise.   This was Glasgow’s tourism pillar that was yet to perform, despite flagship developments along the riverside.  SECC, Science Museum, Pacific Quay, and the new Riverside Museum are all impressive offers of national and international significance.  There was also a strategic partnership, Clyde Waterfront, and a major annual festival.

The issue was, in es 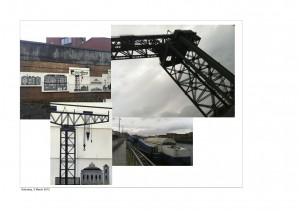 sence, connecting it all up in a navigable package, and connecting that to the city centre.  This is relatively straightforward on paper with a great cluster of activities and attractions on a map where train, bus, cycle and pedestrian linkages look fine.  Investment in river transport infrastructure also looked promising.  The reality is more challenging.  This is a large river and the wind whistles down it.  The potential to populate a riverside walk with pleasant stopping off points and eateries is very limited given the likely footfall and the mostly narrow strip of public walkway.  Comparisons with London’s South Bank, where determined political and business leadership have seen the pedestrian walk opened up, closely followed by a blossoming of activity and commerce, are not really that useful.  There is now an initiative called Creative Clyde (www.creativeclyde.com) that is working to animate the creative economy and a new Pacific Quay masterplan.

Where comparisons with London’s South Bank may bear fruit is in the relationship to local communities.  The role of Coin Street Community Builders was at the heart of the South Bank developments, and social housing, community events, and small local businesses established an impermeable footprint on the riverside.  While animating the bleaker ‘in between’ bits of the river in Glasgow may seem daunting, just offering local communities and creatives opportunities to populate the area is a good starting point. 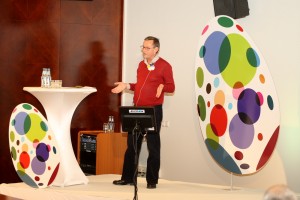 Andrew delivering a keynote at the Creative Entrepreneurship conference in Tallinn.  Around 230 delegates, mostly from Northern Europe, attended.  The conference was a positive exploration of new approaches to strategic development and investment in creative industries, with much attention given to the need for a new ‘coherent narrative’ for the sector.  The ‘can do’ Estonia was a great venue for this debate, not least because Ragar Sill, from their Ministry of Culture, is playing a leading role in shaping Europe’s approach to the creative industries.     The relationship between established cultural infrastructure and the emergent creative industries was a focus of Andrew’s presentation.  The critical mass of opportunities that creative professionals need to make their career exist across the cultural and creative industries sectors, and straddle a mixed economy of private, public and not for profit.  Our strategies are not yet refined enough to realise the potential of combining these different elements of our full creative economy.  The slides for the presentation (Backing into the Future: new routes in old settings) can be accessed at: www.creativeestonia.eu/materials/Andrew_Ormston.pdf.